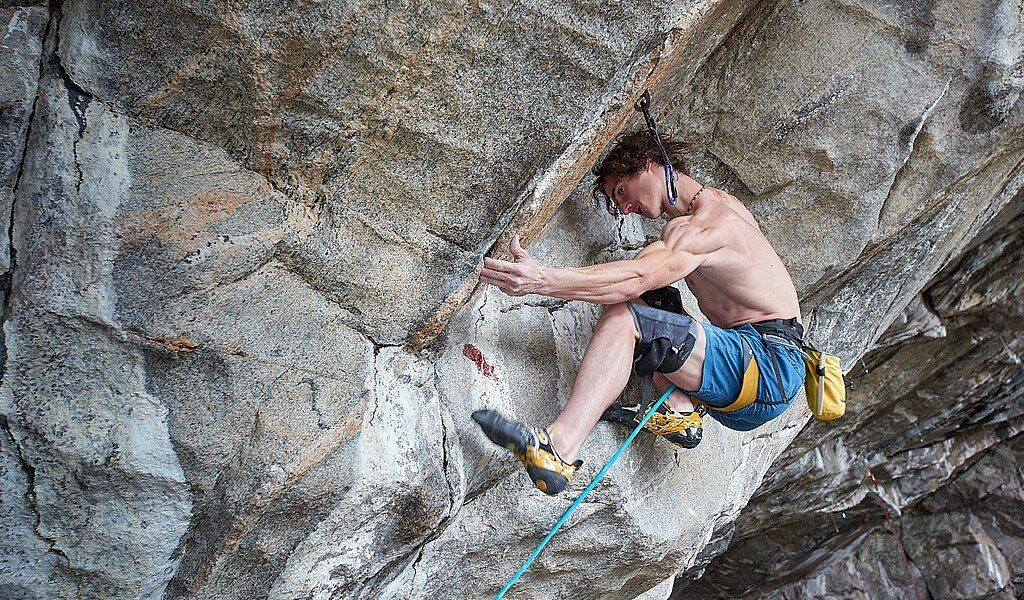 Ondra has over 180 ascents of 9a, or harder, to his name and is the only climber to currently achieve the grade of 9c (5.15d). He also belongs to the exclusive group of 7 climbers who have climbed 9b+. He was the first to reach this benchmark with the ascent of Change in October 2012. With achiveemnts like that, few can argue that Ondra is one of the most accomplished rock climbers of all time.

If there is one name that is synonymous with record-breaking climbing it’s Adam Ondra. This Czechia native has been climbing at the highest level – both on rock and the competition scene – for over a decade. Although he is a bouldering and sport climbing specialist, he also made the first ascent of what is frequently regarded as the hardest big wall climb ever attempted, the Dawn Wall. Ondra is frequently regarded as the best climber ever by outdoor publications as well as fellow professional climbers like Alex Honnold and Magnus Midtbø.

Ondra has successfully completed 180 ascents of 9a or harder, to his name, and is the only climber to currently achieve the grade of 9c (5.15d). He also belongs to the exclusive group of 7 climbers who have climbed 9b+. He was also the first to climb the 9bthis benchmark with the ascent of + grade with his ascent o Change in October 2012.

Adam got a very early entry into rock climbing, first getting an introduction to the sport at the age of three. His parents, both of which are passionate climbers, would take him and his two siblings to crags around Brno, a southern city in Czechia where Ondra grew up.

Ondra was instantly hooked on the sport. At age 7, holds were bolted onto the walls of Adam’s room, ceiling, and even down the hallway, allowing the young prodigy to hone his craft. There were rules though; chalking up had to be done in the bathroom, and he had to climb barefoot so to not mark the walls.

His early years of training clearly paid off. In 2001, at just 8 years old, Ondra onsighted his first 7b+, an impressive feat for such a young age. A year later, he laid claim to a handful of new milestones, a 7c+ onsight and an 8a redpoint. It was becoming clear Ondra was on course to change the future of climbing.

At the age of 14, Adam Ondra joined the European Youth series in 2007 and quickly dominated the competition scene. After a shaky start to his competition career and a 10th place finish in Imst, Austra, Ondra went on to claim a 1st place podium in every European Youth Series event for the next two years.

In 2009, at the age of 16, Ondra met the minimum age requirement to compete at IFSC World Cup events. Despite finishing in 3rd place in the Hall Bouldering World Cup, his first appearance in the adult category, Ondra would go on to claim his first IFSC World Cup podium in Barcelona in August 2009 and eventually finish first in the overall season rankings. That same year he also won the Lead World Championship title for the first time.

Between 2009 and 2021, Ondra earned a spot on over 36 podiums at World Cup events. He also won 11 IFSC World Champions titles and is the only male competitor to win both the Lead and Boulder championships in the same year. The only other person to do this is Janja Garnbret.

Ondra’s road to the Tokyo Olympic Games got off to a rocky start after an alleged bolt-stepping incident at the Hachioji World Champion saw him finish in 18th place. At the next qualification invent, it looked like it could be another missed opportunity to qualify for Sport Climbings Olympic debut after Ondra came down with an illness during the Toulouse Combined Qualifier event. Nevertheless, Ondra pulled off a heroic performance, finishing last in speed, third in bouldering, and first in lead. This result earned him a second-place finish at the event and secured his spot at the 2020 Olympic Games.

Despite being a top favorite for a place on the podium, Ondra’s dreams of an Olympic mental never materialized. Ultimately Ondra’s hopes of winning a medal were dashed by the fact he was a very weak speed climber compared to the other finalists, as well as the aggregate scoring that created the ability for hugely volatile position changes.

After the qualification round, Ondra placed fifth, with the top eight athletes progressing through to the finals. His finals got off to a promising start, managing to set a speed PB and finishing fourth in the standings after the first event. However, when it came to bouldering, which is usually one of Ondra’s stronger disciplines, Ondra finished in a disappointing sixth place with only one top and two zones.

When it came to the lead wall, it looked like Ondra might seal a second-place finish after reaching the hold 42, which was the highest of any climber that had gone before him. This was short-lived though, after Jakob Schubert, the last competitor completed the route and ultimately saw Ondra finish the Games in sixth place.

While Ondra has had a successful career as a competition climber, his achievements on artificial walls pale in comparison to his achievements on the rock. Ondra has completed some of the hardest routes in the world, including an impressive collection of first ascents and repeats of notoriously difficult sport climbs and boulder problems.

Although he has been climbing grades most of us will never achieve whilst even before school, Ondra’s induction into the world-class climbing elite came after his first 9a ascent. In 2006, at the age of just 13, Ondra successfully toped out his first confirmed 9a route Martin Krpan at Misja Pec, Slovenia. More 9a’s quickly followed including his own FA of Perla východu in 2007 and an ascent of the legendary Action Directe in 2008. He also claimed the scalps of many iconic 9a+ routes too including La Rambla in 2008 and Papichulo and Open Air in 2009.

Ondra continued to show his dominance as a world-class climber over the next few years. One of the best examples of this is his first ascent of Change in 2012. The FA of this line in Flatanger, Norway marked a new chapter in climbing history, becoming the first 9b+ ascent ever recorded. Again, just five months later, Ondra went on to claim the second 9b+, with the first ascent of La Dura Dura, a prize both he and Chris Sharma were batteling for.

However, of all Ondra’s impressive ascents, it’s his FA of Silence that represents the pinnacle of his impressive achievements. Like Change, Silence is also located in the Hanshallaren Cave in Flatanger and was bolted by Ondra at around the same time in 2012. However, this project stood for significantly longer, which he eventually managed to complete on the 3rd of September 2017. Ondra cautiously awarded the route the elusive grade of 9c, stating it was much harder than anything else he had ever done.