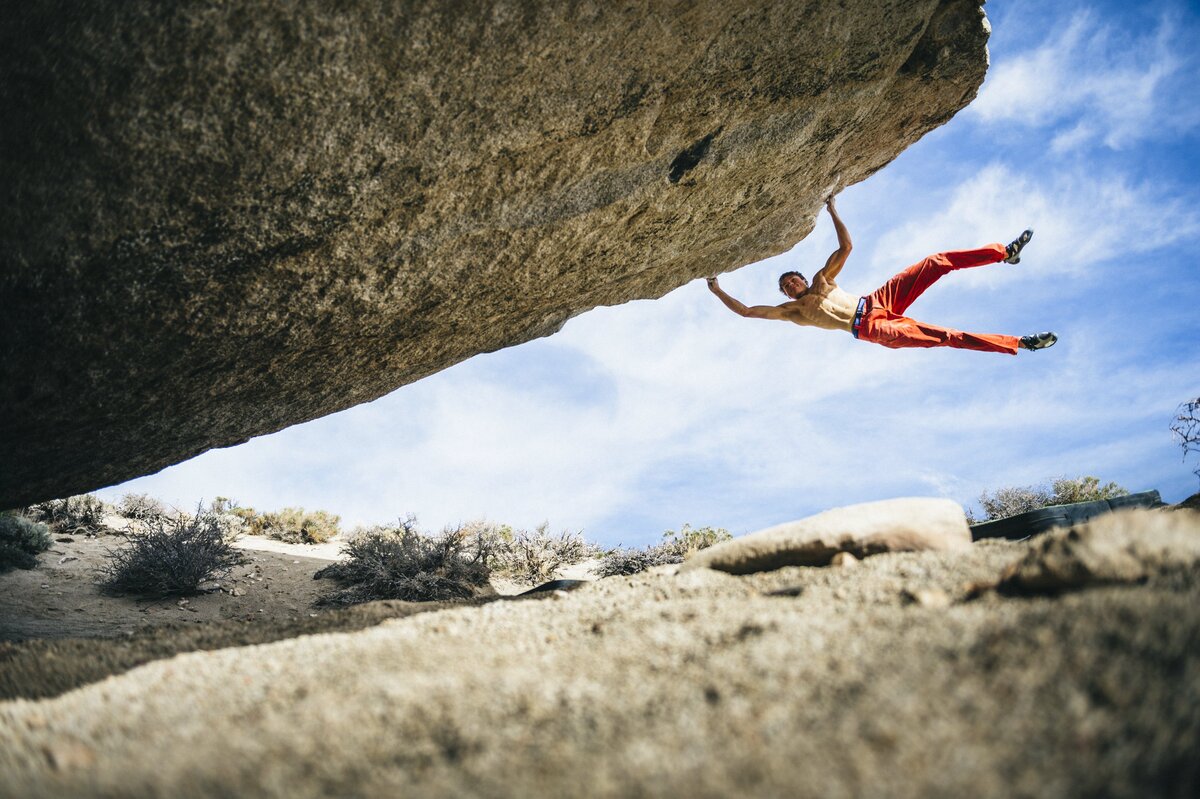 Widely considered one of the strongest climbers in the world, Megos boasts an impressive resume of climbing accomplishments. The german-born climber has proved himself a world-class talent both on the competition scene and outdoors, having made repeats and first ascents of world-class sport routes and boulder problems.

Like many competitive climbers, Megos got his first taste for climbing at a young age. His father, Jorgos Megos, was a keen mountaineer, having first discovered his passion for climbing whilst at university which he shared his two children Alexander and Alina Megos. From the age of 6, the young German started to hone his skills at the nearby Frankenjura, a place regarded as one of Europe’s top sport climbing spots, home to iconic problems like Action Directe.

By the age of 10, Megos was well on his way to becoming world-class talent, making daring 300m big-wall ascents with his father. At 13, he was invited to start training with the Bavarian state team, which quickly progressed to joining the German sport climbing team. It was here where he met the coaching duo Patrick Matros and Ludwig Korb, who both still coach Megos to this day, and two people he credits were instrumental to his success. Megos was one of the first students of the duo, who have since become renowned world-class climbing coaches and authored the training resource ‘Gimme Power: Effective Climbing Training’.

At 15 years old, Megos began competing in the IFSC Youth Series. His competition career got off to a promising start, despite the youth lead competitions being dominated by Adam Ondra at the time.

He secured his first podium finish on just his second outing on the youth circuit in Imst, Austria in September 2008. He finished in 3rd place, having missed out on the silver medal to Max Rudigier by a single move. Megos went on to compete in 17 IFSC-recognised youth competitions between 2008 and 2011, with a 70% podium success rate. Megos podium-worthy performances secured him the overall European Youth Championship title in 2009 and in 2010.

Although Megos entered his first senior World Cup event in 2009, he would only compete in 6 IFSC World Cups by August 2012,  with his best result being a 14th place finish in Puurs, Belgium in 2011.

After finishing school in 2012, Megos decided to curtail his competition appearances. The combination of geographic restrictions and intense competition calendar didn’t allow Megos the freedom to follow his passion for outdoor climbing. Megos even admits himself that, up until this point, his competition career wasn’t going well. After all, he had only really found success on the youth competition circuit.

With the exception of a handful of promotional events, it wasn’t until the announcement that sport climbing would make its debut in the Tokyo 2020 Olympic games that Megos made his return to the competition scene. Megos came back stronger than ever, and showcased his talent as a world-class competition climber, securing his first World Cup win in briançon, France in July 2018. Megos went on to secure his sport for the Olympic games after a heroic performance at the Hachioji World Championships finishing top of the scoreboard in both lead and bouldering. Despite a devastating finger injury that forced him to retire in the finals of the bouldering round, he had done enough to secure his spot for sport climbing Olympics games debut.

Like many of the big-name climbers competing in Tokoyo, the competition format didn’t play into Megos’ strengths, being one of the weakest speed climbers of all the qualified Olympians. Despite clocking a personal best on the speed wall in the practice sessions in the days prior to the games (recording a time of 7.4 seconds) the german finished the speed qualifiers in 19th place. In the bouldering discipline, Megos managed to score 1 top and 4 zones, a result that brought him into 6th place going into the last, and his strongest, discipline. Despite a good start on the lead wall, Megos admits he could never find his flow on the route, mentioning that it ‘felt more like fighting than climbing’ and fell just over two-thirds of the way up the route.

At the end of all three disciplines, Alexander had narrowly missed out on a place in the final of the Olympic finals, finishing in 9th place, with only the top 8 qualifiers moving on to the finals.

Megos has always maintained that his true climbing passion lies in his roots of outdoor climbing, making a number of impressive ascents alongside his competitive climbing career.

Alex’s long list of impressive ascents began to take off in 2009, with an ascent of Drive By Shooting (8c) in his local stomping ground of Frankenjura. In 2011, he claimed his first 9a with an impressive ascent of San Ku Kai in France after just three attempts on the route.

It was in 2012, during his hiatus from competition climbing, that Megos started to make a name for himself by ticking off some notoriously difficult repeats. During this time, he embarked on a year-long globetrotting adventure, visiting iconic bouldering and sport climbing destinations in Europe, North America, Australasia, and Africa.

His first trip brought him to the USA, where he had a group of friends who spent three and a half months traveling around the country. Beginning in Boston, they bought a 1992 GMC Safari, and made their way to the short pumpy test pieces of Rummy, New Hampshire.

Megos made quick work of the short, technical routes the area is renowned for, and bagged ascents of both Riviera (5.13d/8b) and China Beach (5.14b/8c) on his second day in Rummy. Shortly after, Megos would claim his second 9a ascent, this time on Dave Graham’s test piece The Fly (5.14d/9a). Although the line is just 7 meters high (and has only two bolts) the route resisted a repeat for four days until Megos finally clipped the chains after discovering a better beta for the upper section.

The next stop was Red River Gorge, where Megos made quick work of some of the hardest routes including numerous 8c+ routes like Southern Smoke (3rd attempt), 50 Words for Pump, Lucifer (2nd attempt), Golden Ticket (2nd attempt) and Pure Imagination, the latter of which was a flash. After three weeks here, Megos had run out of projects.

From there, Indian Creek was the next destination for Megos, although crack climbing was the style the German climber was less experienced with and had to quickly learn the ways of hand jamming and finger locks. Despite the lack of experience, Megos managed to claim ascents of noticeable lines like King Cat 5.11+, Way Rambo 5.12- and Bad Cat 5.12b.

The remainder of their USA climbing trip was spent bouldering in Bishop and Hueco Tanks. The bouldering got off to a good start, with Megos flashing Blood Meridian (V13/8b), although he suggested a more suitable grade of V12 for the boulder. Mandala also didn’t pose much of a problem to the German crusher. On his last day, Megos finally got a chance at taking on the Evilution highball, after a large enough group with mats and gathered offering enough protection to take on the mega highball. Despite taking a few huge falls of the lip, he managed to send Evilution Direct (V11) on his last day in Bishop.

After the US road trip, Megos made his way back to Europe. Within a matter of days in touching down in Spain Megos, half accidentally, made the first every 9a onsight ascent after clipping the chains of Estado Crítico, despite knowing virtually nothing about the route. This achievement put this 19-year-old crusher on the radar of the global climbing community and in the process bear, Ondra to the achievement of the first 9a onsight, who was actively attempting to claim the had come close on at least three occasions. Just five days after that, Megos also added the legendary Alexander Huber line La Rambla to his tick list after his second try on the route.

Over the next six months, Megos continued to travel the world, building his ever-going reputation and list of impressive ascents as he went. In Australia, after 20 attempts over 3 days, he made the first ascent of R.E.D, a line that had been bolted in 1999, marking the countries first 9a sport route. Other noticeable Australian ascents included a repeat of The Wheel of Life (8c/8c+), which he claimed in a handful of sessions without dialing in the beat for the Sleepy Hollow section of the route, and Wheelchair (9a+).

The remainder of Megos’s globetrotting climbing trip saw him put up lines like Fight Club (9b), Canada’s hardest sport route, and the second 5.15b in North and South America after Perfecto Mundo. He also made the first ascent of what is considered the hardest boulder problem in Wales, Das Pumpenhausen, which he graded 8b, although some suggest it could be more like 8b+.

While this year-long climbing trip represented a breakthrough for Megos being recognized as a world-class climber, this was only the beginning of the young climber’s achievements.

Over the next several years, Megos continued to add to his impressive ascents, with perhaps one of the most noticeable being his first ascent of the long-awaited Perfecto Mundo, an ascent he called an “absolute battle” and the “first hard route” he ever has climbed.

It has taken him 15 days of working the route, some of which was spent with Chris Sharma, who originally bolted the line in 2008. This made it one of his longest projects to date. On his last day on the wall after a rest day, he stuck the crux sequence from the ground for the first time and battled his way to the top.

Mego’s next big ascent came in August 2020, a project that would overshadow the time and effort required for his Perfecto Mundo ascent. Megos spent 60 days on Bibliographie, a route bolted by Ethan Pringle 2009 but had gone without an ascent for over a decade. On the 6th August 2020, on his last day in Céüse, Megos finally claimed the first ascent of the line and proceeded to give it the grade of 9c.

Despite Stefano Ghisolfi making the first repeat and downgrading the route to 9b+ in September 2021, Bibliogphphie is still considered one of the hardest sport climbs in the world.

On 21st September 2021, Megos made the first repeat of Will Bosi’s 9b+, King Capella. Unlike his prior 9b+ ascent, Megos made quick work of the line, managing to clip the chains after 9 days of working the route. Although Megos didn’t give his opinion on the grade, he mentioned that he found an easier beta that allowed him to make quick work of the route.