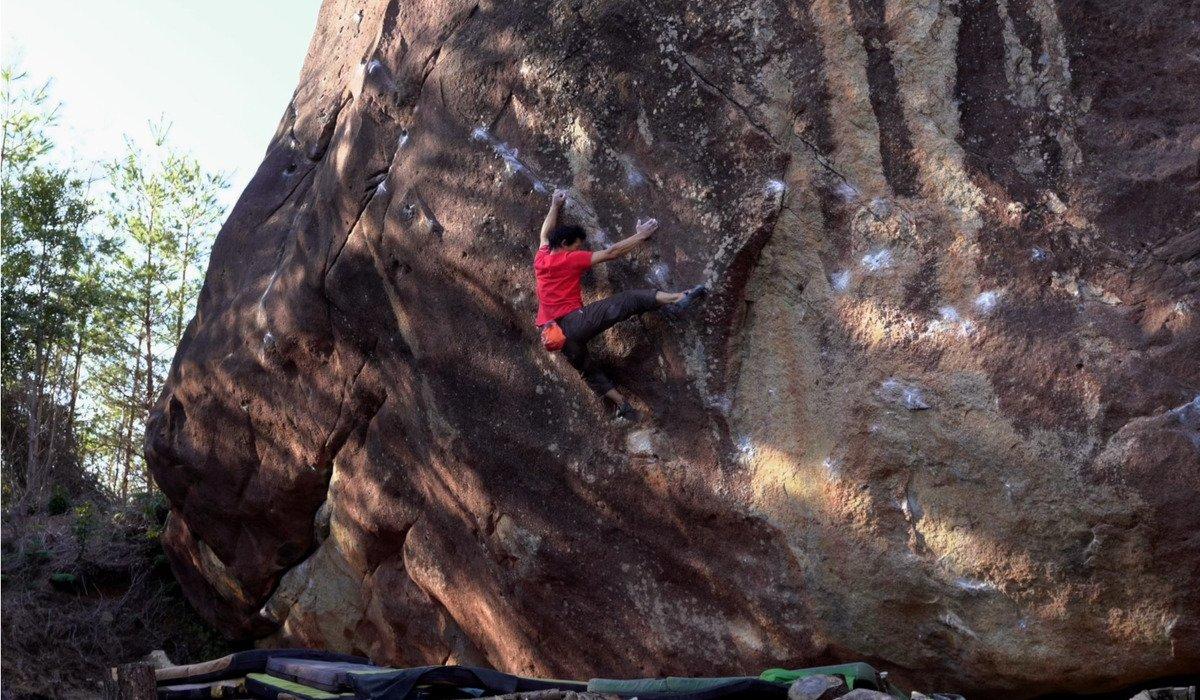 Koyamada is one of the most accomplished climbers of his generation, and perhaps, the most successful Japanese climbers in the history of the sport. He specializes in bouldering, having an impressive list of ascents with over 30 V15 (8C) ascents to his name, giving him one of the most impressive boulder-tick lists ever. He’s no stranger to sport climbing either, having made ascents of notoriously hard lines like Action Directe (9a/5.14d) and Hugh (9a/5.14d) as well 13 appearances at UIAA Lead World Cup events.

Dai started climbing at the age of 15, and for the first 8 years, climbed exclusively in gyms. With only a few years of climbing experience, he quickly gained a reputation as a force to be reckoned with on the competition scene, winning the Japanese National Championships in 1996. Koyamada went on to compete on the international competition circuit between 1997 and 2000, with his best results coming in the Kranj 1998 Lead World Cup, finishing in 4th place.

In 2000, Koyamada decided to leave competition climbing after coming to the realization that “the real nature of my climbing resides in crags”. It became quickly apparent that Dai was going join the ranks for world-class climbers, after making the first ascent of Logical Progression (9a) 27th November 2001. This route, at the time, was one of the hardest sport climbs in the world, with only Chris Sharma’s Biographie, attaining a higher grade.

Over the next few years, Dai continued to build his reputation as a world-class boulder, putting up several V15 (8C) boulder problems around Japan.

Outside of Japan, he continued to showcase his world-class climbing talent. On a 50-day trip to the Grampians Australia in 2004, Dai spent several weeks linking up 4 problems in Hollow Mountain Cave put up by legendary boulders like Klem Loskot’s and Fred Nicole’s (Extreme Cool V8, Sleepy Hollow V11, Cave Man V9 and Dead Can’t Dance V11) and named it The Wheel of Life. He also put up a smaller link-up, Sleepy Rave, both of which remain iconic test pieces for the climbing elite to this day. At the time, Dai proposed a grade of V16 for The Wheel of Life, although the route has since been downgraded to V15, with some even suggesting it could be a V14.

Outside of Japan and Australia, Dai has had a long love affair with climbing in Europe. In an interview with UKC he stated “I like Europe. What’s important for me is not just the rocks and the lines but the whole environment around them.”

Over the next decade, Dai continued to push the boundaries of bouldering, extensively setting up lines across Japan and repeating notoriously hard boulders in Europe such as Big Paw and The Story of Two Worlds. A large amount of controversy surrounded his ascent of the latter. After first topping out the problem in 2010, the online climbing community suggest that Dai was using the wrong starting holds, and suggested his ascent was not a true repeat. He spent the next two years relentlessly attempting the problem, which became an obsession for the Japanese climber. In 2012 Dai eventually climbed the problem again, this time from an even lower starting position, and suggested a grade of V16 for his new low start variation.

To this day, Dai continues to push the boundaries. In 2017, at age 40, he made the FA of Nayuta a V16 boulder in Japan, matching his hardest grade. In 2020 he sent his project Amenohabakiri (V15) without the use of chalk.

Off the wall, Dai owns a climbing gym in Yokohama named Project Climbing. He is also passionate about creating gym holds, a passion he has been pursuing almost as long as he has been climbing. Under his brand Project Dai hold he produces a range of climbing equipment and accessories including chalk, chalk buckets and brushes.

Due to his extensive knowledge of bouldering in Japan, Dai and his team have also produced a number of guidebooks for the renowned bouldering areas of; Ogawayama, Kasagiyama, Kyushu, Yakushima, and Mitake.

Dai enjoys a celebrity-like status in Japan, having appeared on numerous TV programs including Jonetsu Tairiku, Top Runner, Nainai Size. He has also produced his own line of climbing documentaries called ‘Dai’s Video Diaries’ which can be found on his Vimeo channel.