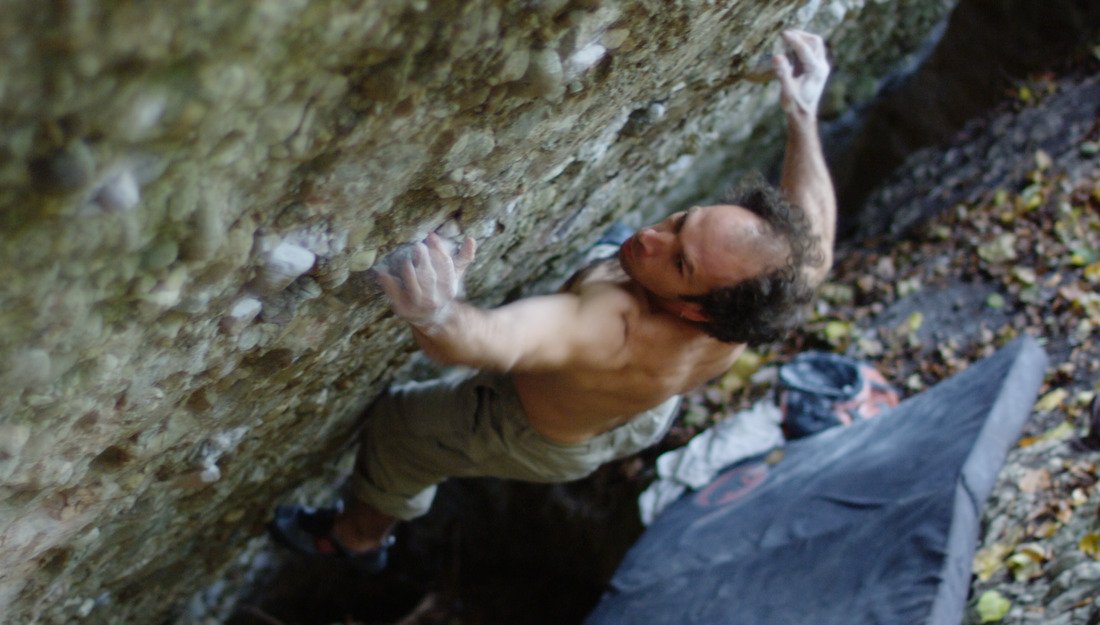 Frédéric Nicole is one of those climbers that shattered the illusion of what many thought was possible. Nicole might not receive widespread recognition in the new generation of gym-going millennials, but he definitely should. This easy-going Swissman single-handedly broke the V13, V14, and arguably, the V15 barriers, and became renowned for putting up an array of impressive first ascents at iconic bouldering spots around the world.

In a time where names like Nalle Hukkataival, Daniel Woods, or Adam Ondra are synonyms with hard bouldering, it’s easy to forget some of the legends that paved the way for the current generation of climbers.

Fred got his first taste for climbing in 1983, at age 13, after a trip with his brother Francois, who is also an accomplished climber in his own right. Nicole confesses he was never the sporty type, often spending his childhood reading and drawing, climbing didn’t come easy to the young Swiss adventurer. The Nicole brothers spent their early teens exploring the mountains and experimenting with early forms of sport climbing and bouldering that were starting to emerge.

It was in 1987, as an unknown 16-year-old, Fred and his brother gained the attention of the growing community of European climbers. The brothers successfully made a repeat of Patrick Berhault’s iconic Le toit d’Auguste, an 8B+ sport route that was considered as one of the hardest routes at the time.

Although the Nicole brothers had proved themselves as capable sport climbers, it was in the evolving discipline of bouldering that they would really leave their mark on the sport. Frédéric was first introduced to the discipline after a trip to Wallis (also spelled Valais) where a developing bouldering scene captivated the Swiss brothers. These early years of Fred’s climbing journey were influenced by the trips and teaching of some of the prominent climbers of the time including Lucien Abbet, Filou Scherrer, Graeme Livingstone and Benoit Dorsaz.

These early years of training and becoming a student of bouldering paid off. In 1992, Fred made the first ascent of La Danse des Balrogs which, at the time, was the world’s first (8B/V13) boulder. Nicole first spotted the fusteric line over three years prior on the steep face of one of the main boulders in the Branson area. Nicole would put up La traction céleste stand 7B+ and the sit start 8A on the same boulder before finally making the first ascent of the V13 problem.

While La Danse Des Balrogs represented a big breakthrough on the bouldering scene, this ascent was the start of a string of iconic ascents from Nicole. The next record-breaking ascent would come four years later, in 1996, on that same boulder in Branson. Off the back of summer that had seen Nicole make a string of hard boulder ascents, Nicole got to work on a new, next level, project on the boulder. After three days of working the beta, Nicole laid claim to Raja, the world’s first (8B+/V14) boulder problem.

With these ascents, Nicole secured his reputation as the best boulder of his generation. Over the following years, Nicole began to travel the world, leaving a trail of hard boulder ascents in his path, with Coeur de Lion (V14/8B+), Crown of Aragorn (8B/V13) and Slash Face (V13/14,8B/8B+) in the Hueco Tanks being some of the most noteworthy ascents of this time.

In 2000, after returning to his native Switzerland, Nicole set his sights on a new problem, or rather, an old one. The boulder problem in Cresciano was one Nicole had his eye on since 1991 and for over a decade, had yet to claim an ascent. Nicole worked this beautifully aesthetic line for an entire season before finally making an ascent in October 2000.  Nicole gave the problem the name Dreamtime and awarded it the grade of V15 (8C), making it the first boulder to achieve this elusive grade.

Dreamtime became an instant classic, with elite climbers from across the world journeying to Cresciano in order to test themselves against, what was considered at the time, the hardest boulder in the world.

Since Nicole’s ascent, the grade of Dreamtime became the topic of debate. Repeats from the likes of Dave Graham, Malcolm Smith and Paul Robinson would see the problem downgraded to 8B+, although some attribute this downgraded to excessive brushing the route received in the years since Nicole’s ascent. In 2009, a hold broke, many climbing this made the problem more difficult. After Adam Ondra made the first ascent post-break he proclaimed it a ‘hard 8B+’ (V14).

Over the years that followed, Nicole would continue to display his world-class bouldering pedigree on almost every continent. In Rockland, South Africa Nicole would put up some of the most iconic, and difficult lines, in the popular bouldering spot including Monkey Wedding and Black Eagle, both of which have been confirmed as V15/8C. He is also one of three people to make an ascent of Witness the Fitness. Although Nicole didn’t offer his opinion on the grade, he did mention it was the hardest route of this style he had ever attempted.

In March 2015, at the age of 45, Nicole made the first ascent of Azark 8c (V15) providing a testament to his world-class climbing ability.

While the name Fred Nicole might not dominate the world of bouldering as it once did, Nicole is still leaving his mark on the sport.

While Fred had been a long-term Five Ten ambassador, putting up most of his ascent in a pair of Moccasyms or Anasazi VCS’s, Nicole recently joined the Five Ten Design team. Nicole has had a long love-affair with climbing shoes and even worked as a climbing shoe resole for several years. He frequently dabbled with his own Anasazi shoes, taking them apart and rebuilding them on his own last shape.

Nicole has released several projects with Five Ten, including the Aleon and Crawe.