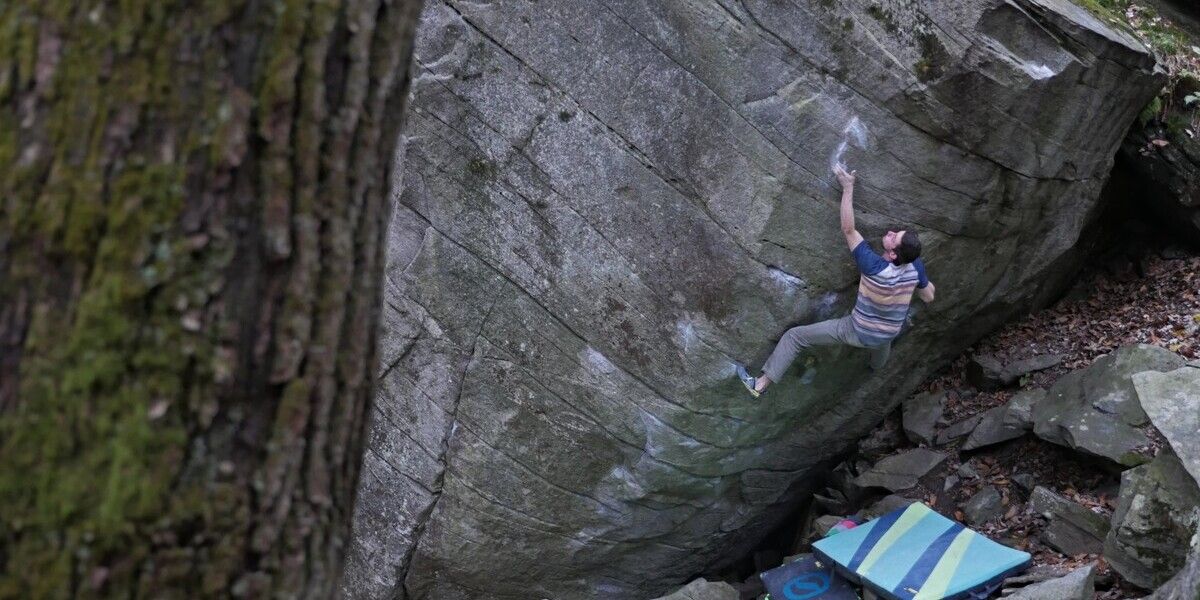 Big Paw is a V14/V15 (8B+/8C) the sit start variation of Boogalagga (V13), a compression boulder up the side of a blunt arête in Chironico, Switzerland. 7 move boulder problem became a popular test piece for bouldering specialists receiving ascent from Dave Graham, Dai Koyamada, Daniel Woods and many others.

The problem was first established by Dave Graham in November 2008. Graham had made an accent of Boogalagga four years prior, and despite spending an hour working the sit start variation, he left Chironico unable to link the sequence together. After returning in 2008, he spent three days working on the problem, before eventually making the ascent on the 27th of November and awarding it the grade of V15/8C.

The next ascent came almost two years later at the hands of Dai Koyamada. Making an ascent of Big Paw was Dai’s main objective for this trip to Switzerland in the winter of 2012. The Japanese boulder started working on the boulder earlier in the year on a trip to Chironico with Jon Glassberg, Connor Griffith and Carlo Traversi – the latter of which made quick work of the stand start variation. Koyamada mentioned that the route felt impossible without good temps due to the slopey compression moves, so left Switzerland without an ascent on that occasion. After returning later in the year, when the colder temperatures allowed for better friction, Dai managed to make an ascent on 12th November 2010, just before the bad weather set in.

Although Koyamada initially agreed with Graham’s grade of 8C, he later changed his suggested grade to 8B+.

Less than three weeks after Koyamada’s ascent, Adam Ondra and Paul Robinson made a trip to Chironico to attempt the boulder. They made quick work of the problem, having only spent 3 days and less than 5 attempts at it. On the 29th of November Ondra claimed the third ascent, and a few hours later Robisons bagged the fourth. Despite working the boulder together, Ondra and Robinson had varying opinions on the grade. Ondra agreed with the original 8C grade, mentioning it was one of the hardest boulders he attempted up until then, while Robinson’s thought 8B+ was a more suitable grade stating “in my eyes 8C is a new level of hard. It is so hard that it should take days and days just to figure out the moves. I feel like I did this thing way too quickly for me to give it the 8C grade.”

Even today, the controversy of the grade of Big Paw is still a highly debated topic. After His ascent, Daniel Woods offered his insight, stating “for me it felt really hard. An intro leading to a large move to a pocket. This move was harder if you’re short.”