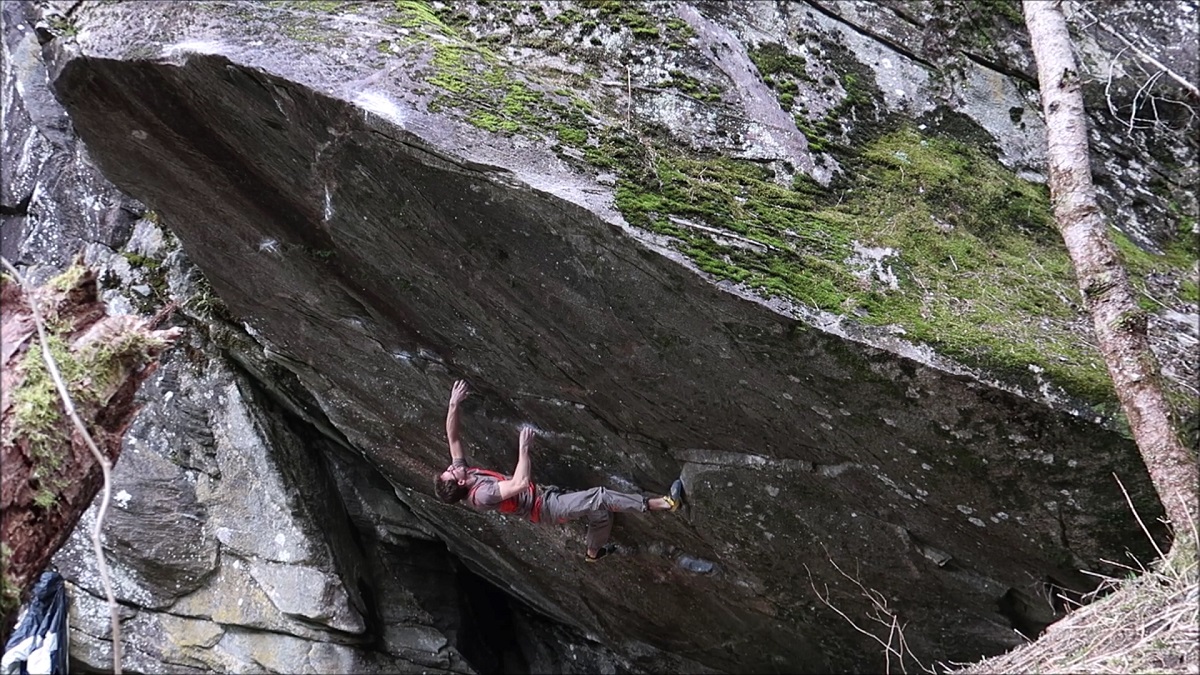 The Bügeleisen stand-start is a V14/8B+ boulder in Maltatal, Austria, first put up by Klem Loskot in 2001. Described as ‘the 6 meter monster’ by Loskot, Bügeleisen was one of the hardest problems in the world, matching the grade of Fred Nicole’s Radja boulder. In 2001, the year of Loskot’s FA, the only problem harder at the time was another of Nicole’s other notorious projects Dreamtime (v15/8C)

Since the Bügeleisen stand start was established in 2001, it became a well-known test piece for many elite climbers. The 50°, overhanging problem got its first repeat pretty quick, with Markus Bock claiming an ascent of the stand start on the 1st March 2002.

After Bock’s repeat, however, the ascents dried up. It wasn’t until Nalle Hukkataival arrived in April 2013, over a decade later, that the boulder eventually got its third stand-start ascent.

With the stand start under his belt, Nalle looked for the next obvious evolution: the sit start. It was a variation he had attempted over several years but hadn’t been able to link up. Despite being one of Nalle’s longest-standing projects, in part due to the notoriously bad condition of the region, he was clearly captivated by the line. He even labeled it as one of the ‘best hard boulders in the world.’

As a problem he described as one of his biggest battles to date, both physically and mentally, Nalle eventually managed to make the first ascent of the bugeleisen sit start, a 12-15 move monster, on the 1st May 2014 awarding the problem the grade of V15/8C. The sit start variation has gone on to become a coveted gem for the world-class bouldering elite.

Since Nalle’s third ascent of the stand-start in 2013, various climbers have gone on to claim ascents of the stand start including Kilian Fischhuber, Christof Rauch and Martin Stráník.

As of 2021, there has only been a handful of repeats of the bugeleisen sit start variation.

The first repeat came at the hands of Jakob Schubert in April 2015. Jakob made light work of the problem, quickly bagging a repeat of the stand start, and creating probably one of the hardest mannequin challenges in the process. Shortly after, on the same day, Schubert later claimed the sit start variation, marking his first 8C boulder problem.

In 2020 Bugeleisen sit got two more repeats. Stefan Scarperi journeyed to Austria in March and made light work of the stand start, ticking it off within 24 hours of arriving at Maltatal. He had attempted the route in 2018, although 25℃ temperatures made an ascent near impossible. Despite initially deeming the sit start link up too hard, after three days working the problem Scarperi claimed the third ascent on the 7th March 2020.

The next ascent came from Nicolai Užnik in December, who has ticked off both the sit and stand start variation. The 20-year-old had made a few trips to Maltatal throughout the year, having first claimed the stand start in March. He returned in summer looking to link up the sit start, although the high humidity and excessive rain stalled progress. Nicolai explained that the sit start moves aren’t particularly hard (7B+), but because they add 3-4 moves on this power-intensive problem, it makes completing the rest of the problem significantly harder.

After returning in December, where the climbing conditions were significantly better, the young Australian claimed the fourth ascent on his first day back, taking a total of four sessions to top out Bügeleisen sit.