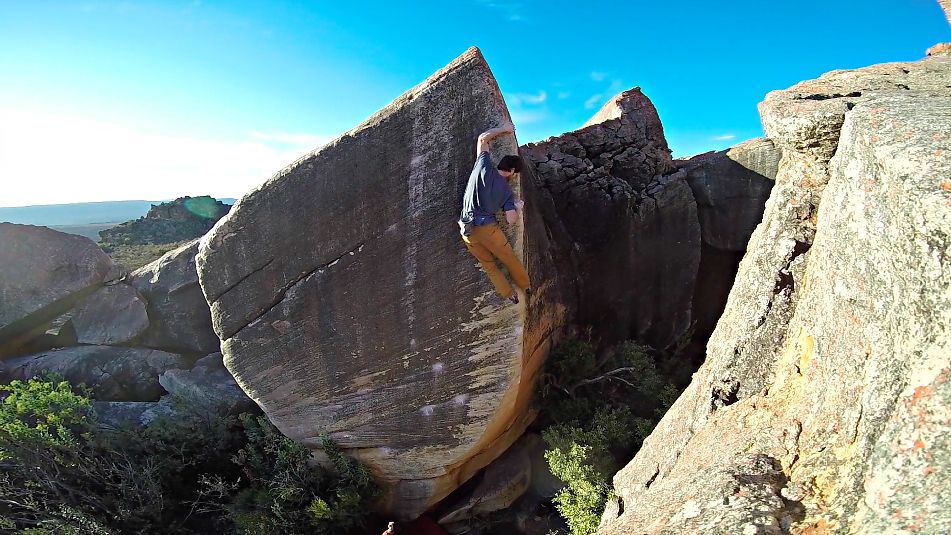 Livin’ Large is a prized 8C boulder problem in the popular bouldering destination of Rocklands, South Africa. Besides the size of the imposing 8-meter arête, what makes the Livin Large boulder particularly noteworthy is the complex – and often insecure – moves throughout the problem. The 8C highball requires a finely tuned beta to make it through the featureless middle section as well as the deadpoint crux, the final move before topping out.

In 2008, Nalle Hukkataival was searching for his next big project. He has spent a considerable amount of time hiking around the Kleinfontein area of the Rocklands, searching for his next boulder project to test himself against. During his search, Hukkataival and Kevin Jorgeson discovered a new bouldering sector beside Kleinfontein, which they later dubbed the Champagne sector.

As with most of the Rocklands, there was no shortage of world-class boulder problems in this new sector, however, one boulder immediately stood out to the Finn as the king line in their new climbing spot.

The tall and proud arête that stood independently in the middle of the sector instantly caught Hukkataival’s attention. The project closely resembled a granite arête, a perfect featureless edge with the only apparent holds being the start and end holds, separated by 8 meters of smooth sandstone.

Despite not attempting the intriguing project on his 2008 trip, Hukkataival returned to the Rocklands in August 2009 with one thing on his mind – that huge arête he had spotted the previous season.

Project Real Big, as Nalle started to call the boulder, was going to be a challenge. Despite not being a fan of projecting boulders on a rope, for the first time in his career, Nalle set up a top rope and began working the individual moves. He didn’t have much of a choice, the combined difficulty, and height of the boulder made it a near-possible feat to do it otherwise.

For the first four days, Nalle went to work dialing in the beta for all 24 individual moves to the problem. By day five, Nalle was confident enough with the problem that it was time to start trying the boulder with pads. However, the number of pads required to attempt such a highball presented quite the logistical nightmare. Convincing fellow climbers to hike pads 45 minutes to a new area that had only one 8C project is a tall order, even for the world-class bouldering elite.

The first few days of projecting from the ground up weren’t overly successful but Hukkataival was starting to piece together the 24 individual moves required to send the problem. Each day showed progression and Nalle’s high point slowly started to creep up.

On one of his early attempts, the Finn made it through the crux and was well on his way to bagging the first ascent, until a disappointing fall from 2/3rds up the problem stopped him in his tracks. On his next attempt, he came even closer to topping out the project, this time falling from the very last move, leading to a huge fall. On his next attempt, he fell off the very last move again and realized the redpoint crux of the problem was the final move to the lip of the boulder. The falls clearly angered Nalle, stating that he couldn’t remember the last time I’d been so disappointed.

As recalled in his blog entry, on the 12th day of projecting the Livin Large boulder, the conditions were perfect. While it was his second consecutive day on the project and the Finn wasn’t feeling completely fresh, he recognized the perfect conditions were too good an opportunity to pass up. Undeterred from the lack of volunteers willing to help haul pads to his project, he made the trip out to the boulder with only 4 pads, a fraction of the amount they came with previously.

On his first attempt of the day, he made it to about 2/3rds up the wall before falling at the crux. After taking a long break, he attempted it again, and this time made it through the crux. Despite a foot slip and a missed chalking opportunity, Nalle reached the deadpoint crux and launched for the final just, stuck the move, and claimed the illusive first ascent in the process.

Nalle clipped the chains of Project Real Big on the 5th of August 2009 and proclaimed it Livin’ Large, a fitting name that pays homage to the project name the problem had become fondly known as.

To this day Livin’ Large continues to be recognized as of the most iconic highballs in the world, keeping company with other equally impressive problems put up by Hukkataival such as The Finnish Line and Burden of Dreams.

For over six years, Hukkatavals intimidating testpiece remained unrepeated. Few would dare attempt the imposing line, and of those world-class climbers who did (including Adam Ondra), none succeeded.

It wasn’t until 2015 when Jimmy Webb made a pilgrimage to the Rocklands that Livin’ Large would receive its long-awaited second ascent. With his sights set on the first repeat of the terrifying testpiece, like Hukkataval, Webb began working the beta and familiarizing himself with the moves on a top rope. Over the next few days, Jimmy set about working on the problem with the support of fellow pro climbers Nalle Hukkataval and Daniel Woods. While Webb was making good progress on the boulder, they were nearing the end of their time in the Rocklands and time was running out to claim an ascent of the iconic line.

On the last day of the trip, the crew was up at 6.30 am and preparing for an early start on Livin Large. On that day, the conditions were good. The boulder, which sits directly in the sunlight for much of the day was still in the shade, and a dry wind had picked up, helping keep moisture and sweat to a minimum.

After a short warm-up, Webb pulled onto the problem. Days of rehearsing the beta had paid off, and Webb perfectly flew through the first half of the problem. As Jimmy edged his way towards the final jug, Hukkataval, Woods, and his other fellow climbers spotted him nervously from 30 feet below. In a final push, Webb launched for the jug, and with a loud scream of relief stuck the last move and claimed the illusive first repeat of the boulder.

Webb’s experience with Livin Large clearly had a profound impact on him. He proclaimed that the boulder was one of the most impressive lines he had ever seen and one of the hardest climbs he had ever attempted.