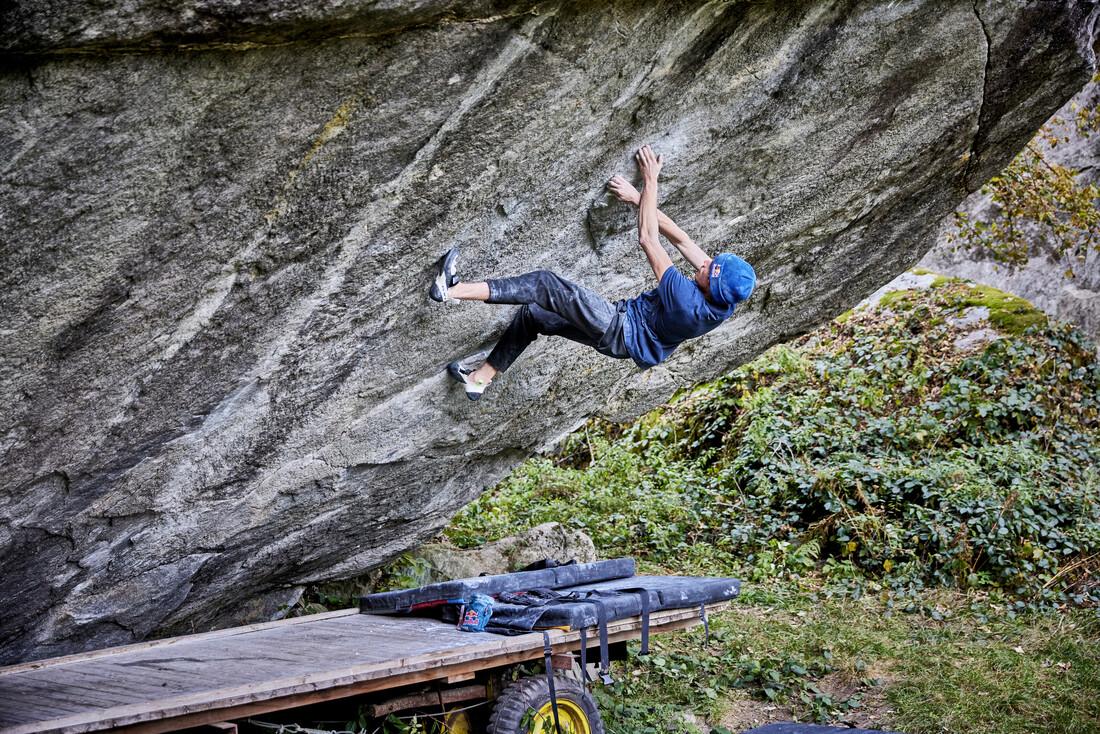 Nestled in Val Bavona, in the region of Ticino, lies one of Europe’s most iconic boulders, Off the Wagon. The problem has two variations, the stand start (8B+) and the sit start variation (8C+). The sit, also known as the low start, is the country’s first boulder of the grade and the hardest problem in Switzerland.

Off the Wagon Bio

The now-iconic problem first popped up on the climbing communities radar after Dave Graham moved to Ticino in 2005, drawn to the region because of its never-ending variety of high-quality rock and endless climbing opportunities.

“The pool of projects is massive, to me this is like the future realm” he proclaimed. Graham’s early attempts at various projects in the Bavona valley were featured in the Sender’s Film documentary Dosage III. The film included a short clip of Graham working a 50° overhanging boulder beginning, somewhat artificially, with a standing start on an old trailer beside the boulder.

A year later, the Sender’s Film crew returned to Ticino to shoot Dosage IV, which this time included footage of Chris Sharma’s initial attempts at the same boulder problem. The documentary showed Sharma beginning to decipher the powerful beta, which proved to be the key to unlocking the powerful crux sequence. The crux move, the second move of the stand start, involves a dead point campus crossover to a shallow right-hand pocket.

From here, the problem traverses along the horizontal crack to the right-hand arête into an easier-going outro sequence.

Despite being unable to claim an early ascent, Sharma’s beta paved the way for future ascents of the problem boulder, with most of the climbers who went to claim an ascent opting to use his campus crossover beta for the crux move.

Sharma’s superstar status as a climbing icon significantly increased the profile of the “wagon project”, with a flurry of world-class bouldering elite pilgrimage to Ticino to test themselves against the powerful problem.

Chris Sharma wasn’t the only person Graham introduced his wagon project to in 2006. That summer, he also invited Nalle Hukkataival to the area and the duo began working on the problem together.

However, Graham was quickly sidelined due to an injury sustained while training for another project, and Nalle left Val Bavona unable to claim the first ascent in 2006.

Over the next few years, Nalle sporadically returned to the long-standing project, although poor conditions and time constraints left the Finnish bouldering specialist without an ascent for over 6 years.

In November 2012, Nalle returned to Switzerland with his sights set on claiming the first ascent of Graham’s long-standing project. Although he eventually managed to top out the problem on the 21st of November, it wasn’t without its difficulties. Bagging the ascent took three sessions of working the crux move on his 2012 trip, more than any other boulder in the 8B+ range. Nalle also mentioned in a blog post that he fell off the crux move at least eight times on that trip before eventually sticking the move.

Nevertheless, after eventually claiming the elusive first ascent of the notorious problem, Nalle named the problem Off the Wagon, with suggested a grade of 8C.

After Nalle’s first ascent, it didn’t take long for Jan Hojer to claim the first repeat. In fact, he bagged his ascent just two days after Nalle’s FA.

Like many world-class crushers, Hojer didn’t think an ascent of Off the Wagon was possible for him. As he mentioned on his 8a profile “I didn’t even dare to dream of that boulder when I saw Dosage for the first time.”

On his Switzerland trip in later 2012, Hojer was making fast work of some of the area’s most difficult problems including an ascent of General Disarray (8B) and a flash of both Cellar Door (8A) and Ganymede Takeover (8A).

Inspired by Nalle’s recent ascent, Hojer began attempting Off the Wagon and it quickly became evident that a quick repeat was possible. After 20 attempts over two sessions, Hojer successfully linked up the power crux move and went on to claim the first repeat of the problem.

After his ascent, Jan suggested a personal grade of 8B+ for the route. He mentioned that while it is certainly a difficult problem, it was even more difficult for shorter people. Jan’s 13cm height advantage over Nalle certainly played a role in his suggested downgrade.

In November 2018 when the, then 20-year-old Colorado crusher, Shawn Raboutou and Swiss bouldering buddy Giuliano Cameroni (who grew up in Ticino) opened up the possibility of a low start extension. They noticed a lower start hold and joked about the addition of a sit start to the already extremely different problem. They didn’t even know if the low start extension was possible until Raboutou suck the move, and then eventually went on to bag the first Off the Wagon sit start on the 27th of November 2018. He suggested the grade of 8C+/V16, making it the most difficult bouldering problem in Switzerland and a contender as one of the hardest in the world.

Since Shawn’s ascent, a handful of climbers have gone on to claim an ascent of the sit start. Some, like Daniel Woods and Jimmy Webb, opt for a sit start on the trailer, others like Sergei Topishko or Giuliano Cameroni, move the wagon and stand start from the ground. Regardless of whether they go the low start or sit start, the stand start holds remain the same.

In January 2022. Sergei Topishko attempted a sit start from the ground, adding an additional 2 moves to the problem. While he was unable to send the additional link, this is undoubtedly the next progression of this notorious boulder problem.

Even to this day, Off the Wagon remains one of the most iconic boulder problems and a test piece for the bouldering elite.

In early 2022 various climbers, including Giuliano Cameroni and Yannick Flohe confirmed that a small crystal is missing on the hold before the crux, making it possible to hold a full-crimp position on the hold, making the crux sequence slightly easier. Sergei Topishko suggested that this may have affected the grade of the route, suggesting the new grade might be closer to 8C/V15.

If you plan on making a pilgrimage to see this iconic boulder for yourself, then it’s important to know that there are some access issues for much of the year. From April through October the boulder is inaccessible due to the landowner wanting to conserve the grass for his cows.