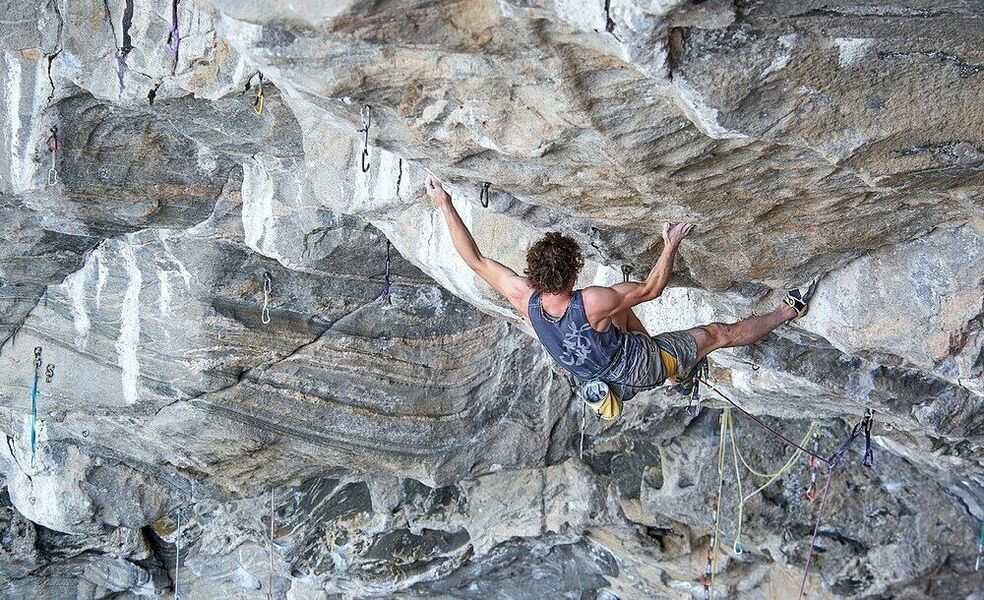 Vasil Vasil, the world’s third 9b+ route established by Adam Ondra in December 2013, found on the limestone walls of his local crag of Sloup, an hour outside of his hometown of Brno.

Standing at only 12m high, Vasil Vasil is considerably shorter than Ondra’s two prior 9b+, Change (55m) in Flatanger, Norway and La Dura Dura (40m) in Oliana, Catalonia. While the route might be shorter, it is by no means easier.

Hidden within this 22 move route are some extremely difficult sequences. The route is so difficult in fact, that Ondra had bolted it 5 years prior to making the first ascent and had spent a total of 20-25 frustrating days on the wall attempting the route.

The first 7 meters of the route begins with about 15 powerful compression moves of 8b climbing out of the 40° cave to reach the crux section on the headwall. The crux sequence then involves a 4 move boulder problem at a difficulty of 8B+, with a single move of at least 8B on its own. Whilst this move, involving a sharp two-finger crimp, a high right heel and massive reach to a sloping wide pinch, was possible for Ondra in isolation, it became significantly more difficult when linking up with the start sequence. After the crux, it’s a few moves of 6a to the chains.

After bolting the line and putting in a few burns, Ondra wrote the project off as an impossibility. Three years later, he himself whilst making it through the crux section, and realized an ascent of the elusive line might be possible. Despite this early success working the crux, when it came to linking the moves sections together, it spiraled into the multiple-year long battle to clip the chains.

How did this relatively short route pose such a problem to one of the world’s best climbers? Except for the handful of extremely difficult moves, Ondra cites the skin-destroying nature of the sharp limestone walls as a major problem, which allowed him to only have two attempts on the route per day, with the second attempts being noticeably worse.

Another reason for the long-awaited ascent was also due to the highly condition-dependent nature of the route. The cold air of the cave would meet the warm air outside, and lead to a build-up of condensation on the crux section of the headwall. To avoid this extra moisture Ondra would need to attempt the route when both temperatures were the same, which is why Ondra made the final ascent in the -2℃ temperatures of winter.

Before eventually clipping the chains, Ondra came tantalizingly close to the elusive first ascent. The weekend prior, the Czech climber had made it through the crux section, although fell on the final few moves of 6a. Undeterred, Ondra returned 5 days later, and after a quick warm-up, made the ascent in the bitterly cold Czech winter temps.

The name Vasil Vasil, was a name Ondra originally dubbed the project when he first bolted it. The name is a play on words of La Dura Dura (The Hard Hard), another one of Ondra’s iconic 9b+ ascents that he was working on around the same time.  He gave the word Facil, the Spanish word for easy, which Ondra gave a Czech twist, with Vasil Vasil.

The route also shared some similarities with La Dura Dura. Both routes have a boulder-style start which then leads into a difficult crux sequence. The main difference between the routes is that La Dura Dura has additional tricky sequences after the crux.

Although there is no footage of Adam Onda’s Ascent of Vasil Vasil, you can see him discussing the route with Magnus Midtbø in the video below.