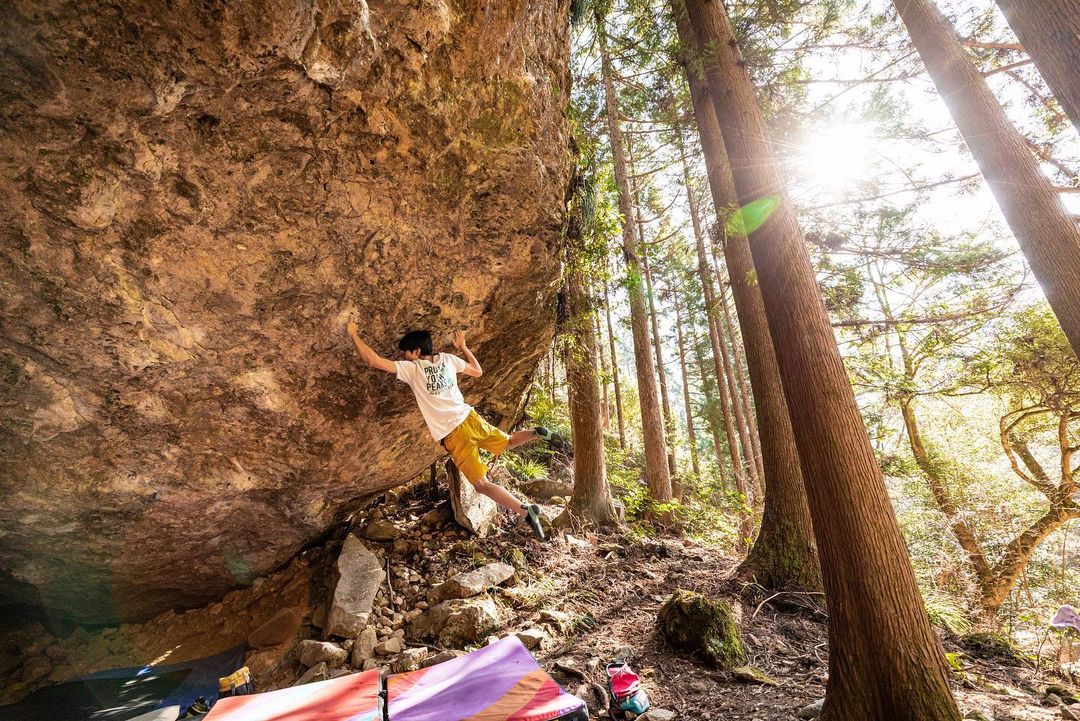 Byaku-Dou, meaning ‘The Road To Heaven’ in Japanese, is a 22 move boulder problem in Horai, Japan. Dai Koyamada established the boulder problem in 2003, a time when the Japanese bouldering-specialist was putting up various problems in the V15 grade range, including Hallucination and The Wheel of Life.

Byaku-Dou begins with a feet-first start into a traverse across a 40° roof overhang, with approximately 11 moves of 8B/V13 climbing, made up of technical moves on tricky, crimpy pockets. The second part of the problem, which intersects with the upper section of Bachelorette, a slightly easier 8A+/V12 with a redpoint crux that involves powerful dynamic movement from a left-hand mono-pocket into an iron cross position.

From here, there are another 7 moves before the route finishes on a jug at the top of the headwall.

Nagao stated that the undercling, one of the first moves in the starting sequence, is extremely difficult, even as a single problem on its own. After this initial crux, there are approximately another 9 moves of 8B, before reaching the hugely power-intensive single mono-pocket dyno.

Motochika is an experienced boulder, having claimed the second ascent Babel (8C/V15) as well as other long boulder link-ups, although he states he had never experienced a problem that had a crux in both the first and second section of the problem.

Perhaps even more impressive, the 5-foot climber only spent 20 days working the problem across both the 2018/2019 seasons before eventually claiming her ascent. When she first started working on the problem in 2018, it became quickly apparent that she didn’t have the reach to use the same toe hook that Koyamada and Nagao had used to complete the lower crux sequence.

This led her to find her own beta for the crux, through the use of a barely-there foothold. On her final blast of the 2018 season, Ishi made it through both the starting sequence and mono-pocket dyno, and came within touching distance of an ascent, although an unfortunate slip on the final moves stopped her from claiming the third ascent of Byaku-Dou in 2018.

Amed with the advantage of a little extra growth and knowledge of the route from the previous season, the young Japanese crusher returned in January of 2019 for a second attempt. Ishi quickly realized that her new beta was now unworkable due to the little extra height making her to scrunched up in the sequence.

Undeterred, Ishi took to the gym, simulating the crux sequence until she had the moves dialed in. Eventually, in the early hours of the 3rd May 2019, she eventually clinched the third ascent of the legendary boulder.