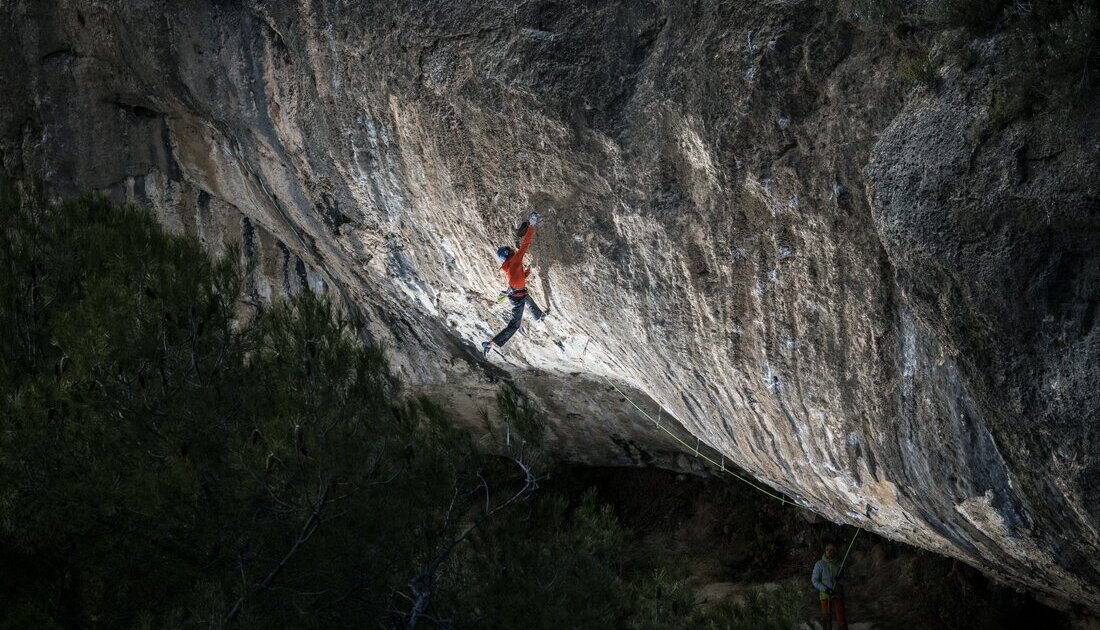 The 15m Margalef line that became one of Chris Sharma’s biggest physical and mental battles of his career, first featured in the climbing documentary Progression.

First Round First Minute is a 25 move sport route in the Laboratori sector of Margalef. A name inspired by the iconic Muhammad Ali vs Sonny Liston fight, this short sport route packs a powerful punch. FRFM isn’t a stamina-testing line with easy sections or any obvious rest areas, beginning to end, this is a route consisting of powerful bouldering-style climbing that demands perfection on the difficult moves throughout the entire line.

The line shares the first several moves with First Ley, the left-hand variation of which Sharma established in February 2010, after becoming frustrated at being unable to stick to the crux sequence at the top of FRFM.

The line begins on a 60°overhang with an 8B+ boulder sequence and moves onto the tufa headwall of poor crimps and pinches with the redpoint crux coming at the very end of the route.

It isn’t an overly difficult move, a left-hand mono-pocket boulder going for a reachy right-hand crimp, which Sharma suggests to be around of 7B+/7C boulder problem. However, due to the powerful 20+ required moves to get to it, endurance takes a toll. Once through this redpoint crux section though, it’s a relatively simple 5 moves to the chains.

The route captured the attention of the climbing community in 2010 after Sharma shared the project in Big Up Productions film Progression. Due to the amount of time Sharma had invested into the project, many speculated it could be his hardest ascent to date.

Like anything that gains widespread notoriety in the climbing community though, FRFM received its fair share of controversies.

After seeing the movie, Nalle Hukkataival became interested in attempting the route and traveled to Margalef with the intention of attempting an ascent. Sharma, who had no prior relationship with Nalle, became aware of his intentions via his blog post and requested Nalle allow him more time to gain the FA of his project.

This entailed a community-wide debate on what is known as ‘red taping’ when a climber closes his project off to others. Some suggested that the commercial interest of Big Up Productions played a role too, with large sums of money to be made off the back of an ascent of First Round, First Minute.

Sharma first started projecting this illusive Margalef line in early 2009. Despite this period being one of the most successful of his career, sending Jumbo Love (9b) and Golpe de Estado (9b) a few months prior, Sharma hit difficulties with the project early on.

By 2011, Sharma had spent 3 years and over 50 attempts on the redpoint crux, yet was still in search of the first ascent of his long-standing project. Despite coming close to an ascent the season prior, having made it through the crux only to slip off on the last moves, Sharma was beginning to lose his passion for the project. The psychological complexities of failing repeatedly in the same move were beginning to take a toll.

As he mentioned in an interview in 2010 “I need to get away from this route, to mix things up, to regain my spirit. It’s not good to try the same route over and over for too long… I need to take a break because I am starting to feel a mental block.”

Over the months that followed, Sharma left FRFM behind, opting to pursue different projects around Catalunya and reconnect with the joy of climbing. While he managed to remove the route from his min, he admitted in an interview with PrAna that his confidence and belief in his ability had been shaken by the experience of not being able to complete the route.

On 19 April 2011, after a two-month hiatus from the route, Sharma and his friend Cristian La Miel were having a low gravity day. Cristian had sent his 8a+ project in the El Barranco sector of Margalef, and Sharma had reached a new high point on another of his long-term projects, Perfecto Mundo.

On that day, the conditions were excellent and the crag was quiet, there was no one else there except a french couple. Sharma decided to check in with FRFM and refresh himself with the beta. With expectations low, Sharma cruised the route, and without overthinking it, flowed through the loathsome redpoint crux, with the help of discovering easier beta, and moments later had the finishing jug in his hands.

In a combination of the short nature of the route, the amount of time he spent dialing in the moves, and perhaps even the widely publicized nature of the line, Sharma mentioned he found it difficult to put a grade on FRFM and opted to leave the grading to future ascensionists.

“I’m not sure whether this is one of the hardest things I’ve ever done, but it’s certainly one of the most rewarding,” Sharma mentioned.

Three years after Sharma’s first ascent, Ondra took a trip to Spain in early 2014 with his sights set on claiming the first repeat. Ondra had a little history with the line, having worked FRFM for two days in 2011, although the warm summer temps at the time made a send near impossible. He also had a few blasts on the route in November 2013 too.

Despite some holds being wet and the conditions being poor, the psyche was high and Ondra was keen to get started on route immediately after touching down Margalef. Although an essential hold in the start hold was wet, Ondra was able to stick the move, but the extra gripping required made the upper sequence more difficult.

Nevertheless, Ondra showed promising signs that a quick send was on the horizon. After 5 days on the route, Ondra came close to claiming an ascent on this third burn of the day, despite admitting he didn’t feel like he climbed particularly well.

The next day, after waiting all day for the sun to dry out the route as much as possible, Ondra sent First Round First Minute on his first attempt of the day. After his ascent, the Czech climber confirmed the 9b grade that many had suspected.

Megos was next to claim an ascent of FRFM, which also marked his first step into the 9b realm.

Up until First Round First Minute, Megos mentioned that he had never found a 9b that had motivated him to put in the effort to claim an ascent, despite having a couple of burns on a handful of lines.

After first attempting the line for three days in November 2015, he was unable to claim a send. Despite coming close to clipping the chains, having made it to the final moves, Megos remained psyched to return to Margalef to finish it off. The German crusher returned the following month and after a few days refreshing himself with the moves, sent the problem on the last burn of the day on the 31st December 2015.