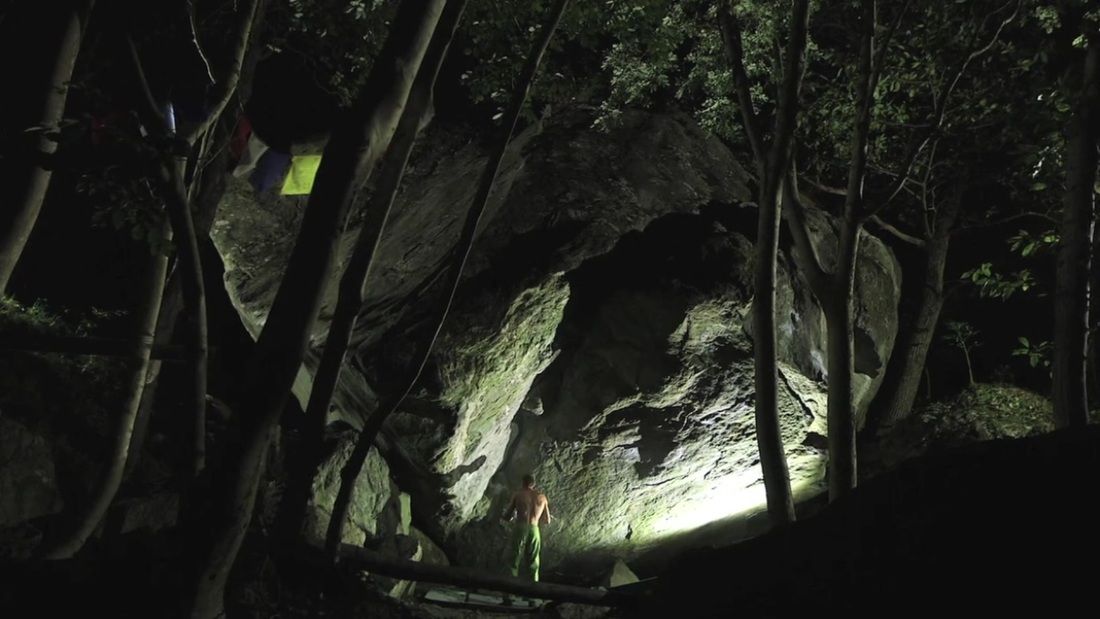 A 14 move semi-traverse that links up a series of microscopic crimps and poor footholds. Put up by double Bouldering World Champion, Christian Core, the historical test piece was considered as the most difficult problem in the world for several years.

Gioia, Italian for Joy, came to fruition after Varazze local Marco Bagnasco became inspired by Fred Nicole’s iconic masterpiece Dreamtime. “I’m not sure exactly when, but someday I’ll find another difficult problem, perhaps not as hard as Dreamtime but just as beautiful” Bagnasco proclaimed to Core.

True to his word, Bagnasco discovered the boulder near his home town of Varazze in the Province of Savona. Core started to make ascents of various variations in the shallow cave, most notable of which was the stand start of Gioia, starting in the middle of the cave wall on a small crimp rail.

Knowing the route wasn’t fully complete, Core started working the beta for the sit start, beginning further down the left-hand side of the boulder and adding an additional 5 moves to the problem, which this sequence on its own sits in 8B+ grade range with a crux move on an impossibly small crimp.  This then links up with the existing stand start, which consists of three moves of approximately 8A+/8B, leading to the top-out section on the far right of the boulder-traverse ending with a 5 move sequence of 7B+.

Despite initially thinking a sit start might not be possible due to the lack of footholds, Core eventually discovered a beta that made the link up possible. Over the course of four months, Core worked the moves, trips to the cave becoming increasingly more frequent in an effort dial in the beta for each move, despite the skin-shedding nature of the razor-sharp crimps.

As winter conditions started to set in over December 2007 and the cave and its hugely condition-dependent crimps were becoming unworkable. During one of his winter attempts, Core accidentally broke a hold in the start sequence, the most difficult part of the problem. Worried that he might cause further damage to the boulder, and lose the possibility of a sit-start link up forever, Core decided to wait for a better weather window.

Eventually, in early 2008, the weather began to clear and allowed for workable conditions. Core went on to claim the first ascent on the 25th of February stating that it was the hardest climb of his life. While he didn’t offer an official grade for the problem, he suggested it to be around 8C/V15.

Three years later, the now-notorious problem received its second ascent at the hands of Czech crusher, Adam Ondra. Fresh off his send of Terranova, another boulder-traverse Ondra had been projecting in his hometown on Brno, which he awarded the grade of 8C+/V16.

Ondra was on the hunt for more world-class lines. The Czech climber worked Gioia for a total of 11 days, with only 1 attempt on each day due to the razor-sharp crimps making any additional attempts near impossible. The holds were so bad, Ondra mentioned in an interview with Planet Mountain that he wasn’t able to complete a single move for a staged photoshoot after his ascent.

Ondra had never experienced a climb like that before and as a result, suggested a new grade of 8C+/V16. He stated that if Gioia was given the grade of 8C/V15, bouldering grades wouldn’t make sense, and subsequently, there would need to be a downgrading of every 8B+ and many 8C problems.

In 2013, Nalle Hukkataival, one of the most accomplished boulders of his generation took to Varazze attracted by the notoriously difficult Gioia.

Like many other climbers, the Finn made quick work of the stand start, claiming an ascent in a handful of days. Although, when it came to linking up the sit start, his thrashed skin and poor conditions meant Nalle left Italy without an ascent.

He returned again in 2014, looking to the elusive sit variation.  With only a few days of work, Nalle came tantalizingly close to a send, although fell off on the final move of the problem. With progress once again hampered by conditions, Nallewas forced to wait several more days before eventually claiming the third ascent on the 22nd February 2014.

As he stated on his blog, “What makes Gioia even more challenging is the Mediterranean climate and skin being a limiting factor on the small sharp holds. One moment it can be grippy and the wind will change direction blowing from the sea, making the small crux hold almost un-grabbable”

When it came to suggesting a grade, Nalle seemed conflicted. On one hand, he confirmed it to be one of the hardest boulders in the world, and harder than many other V15 problems. Yet, on the other hand, wasn’t sure the difficulty merited a whole extra grade, stating that if Gioia was indeed a V16/8C+, then there would be other problems that would also need to receive an upgrade.

As with any high-profile climb or boulder problem, Gioia has seen its fair share of controversy.

Dave Graham, Daniel Woods, Dan Beall, and several other climbers made their way to  Varazze to attempt the coveted problem in 2015. They made good progress on the problem and even discovered a new beta for the start sequence with the use of a kneebar.

However, whilst working the beta the climbers opted to use a loose foothold, which none of the previous ascensionists of the stand, or sit start variation had used. The hold inevitably broke during an attempt to create a larger, easier hold. After consulting with the Varazze climbing community, Core returned the next day and glued the foothold back on in an attempt to preserve the iconic problem.
The American climbers were clearly unhappy with this, suggesting Core did it maliciously in order to create an elimination line, which led to a heated post on The Burrow Files as well as a passionate community-wide discussion.

In December 2020 8a.nu reported that a new crimp has appeared on the problem, which will undoubtedly impact the route’s grade.