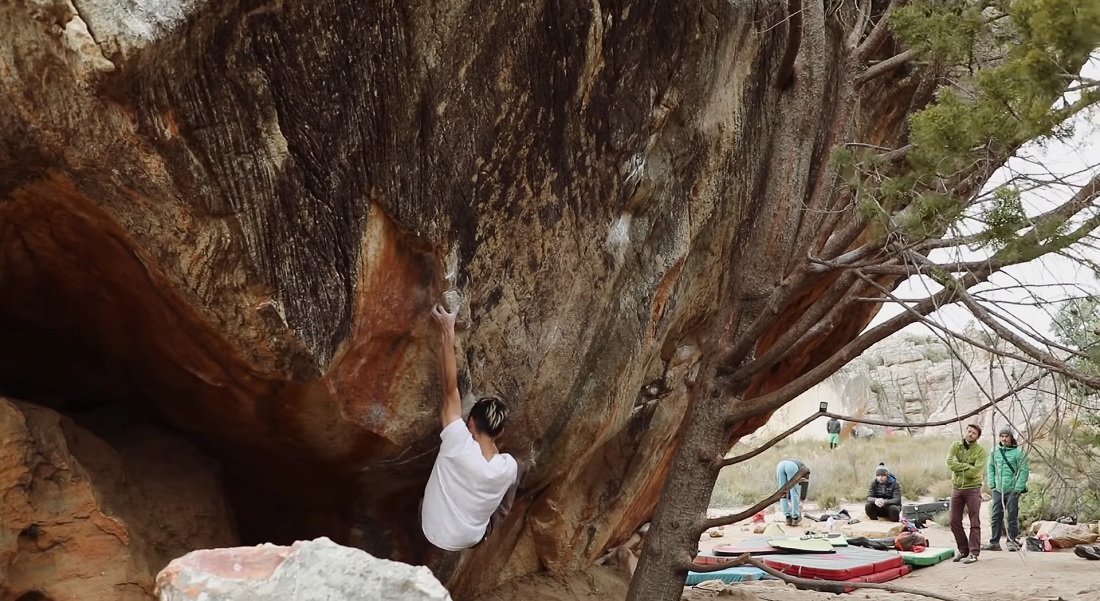 Monkey Wedding is an 8C/V15 boulder problem in Rocklands, South Africa. It is one of 20 problems on the ‘A Question of Balance Boulder’, in Roadside, one of Rocklands most popular bouldering sectors.

The notoriously difficult 14 move problem was put up by Fred Nicole in August 2002. At the time of his first ascent, Nicole awarded the problem the grade of 8B+/V14. Since then the route has had over a dozen repeats with the consensus being that the route is closer to the 8C/V15 grade.

As a result, the upgrading of Nicole’s Monkey Wedding problem not only makes it a contender as one of the harder problems in the Rocklands but also amongst the first boulder ascents to be in the 8C grade range.

For over 8 years since the FA, the notoriously difficult route went without a repeat. It wasn’t until 2010 that Paul Robinson eventually opened the door and claimed the first repeat.

After starting to learn the beta on 15 July, it took Robinson almost 2 months of working the problem before he would claim the ascent, stating the ascent was a “huge mental and physical struggle”.

Despite making it to the final move on several occasions within the first few weeks, Robison cited the hot summer temperatures of South Africa as a big challenge. Eventually, on his final day in the Rocklands, Robinson claimed the first repeat on the 25th of August 2010. He claimed the line was his second hardest send at the time, behind Lucid Dreaming, which he had topped out 5 months prior.

Monkey Wedding wasn’t the only Nicole classic Robinson managed to claim on his 2010 South Africa adventure, he also left the Rocklands with an ascent Black Eagle (V14) under his belt.

Hot off the competition circuit, and claiming gold at the overall IFSC World Championship in Acro the previous month, Ondra made a trip to Rocklands to focus on claiming boulder ascents.

In less than three weeks, Ondra claimed over 22 ascents of V11 or higher on this trip Unsurprisingly, the Czech sending machine made light work of Monkey Wedding, bagging the third ascent with just four days of work. On his 8a Logbook, Ondra stated that it was his “hardest problem so far” and agreed with the V15 suggestion of Robinson, stating that the problem deserved the grade.

In the decade since Robinson’s first repeats, Nicole’s iconic problem has become a test piece for world-class climbers

After Ondra, Daniel Woods claimed the fourth ascent in 2012. Woods mentioned that they found the problem “very mentally challenging”, partly due to the fact that the holds are so sharp that it only allows for a couple of burns during each session.

Woods wasn’t the only elite climber to struggle with the problem. Nalle Hukkataival, who eventually claimed the eighth ascent, had attempted the route over several trips to the Rocklands, although he faced skin issues due to the razor-sharp rock. Dave Graham also called the line one of his “ultimate global nemesis projects” after getting shut down for almost two weeks in 2015. He eventually managed to claim an ascent in August 2016, after discovering beta for the crux sequence.

Other noteworthy ascents followed over the years, including a 30-minute send from Alex Megos, and a barefoot top out from Charles Albert.