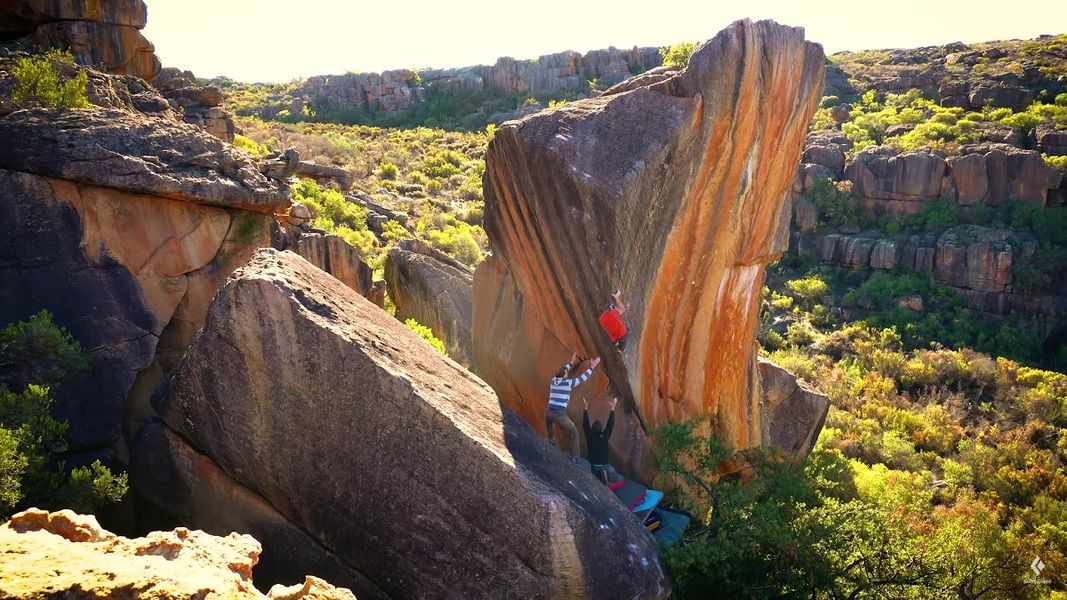 The Finnish Line is one of the hardest bouldering problems in the Rocklands. Many elite climbers have been captivated by this line problem including Nalle Hukkataival, Alex Megos and Daniel Woods

The Finnish Line is an imposing 21 move highball in Rocklands, South Africa. After Nalle Hukkataival made the first ascent on 27th June 2017, he initially didn’t offer a grade for the line, although suggested it was one of the hardest lines in the area. This placed the problem in V15/V16 territory, putting it up there with other iconic Rockland boulder problems like Livin’ Large and Black Eagle SD.

The problem clearly had a profound impact on Nalle, as he labeled it a “gem rarer than diamonds” and a line he would remember for the rest of his life.

This blunt arête isn’t just one of the hardest in the area though, it’s also one of the highest boulders, standing at an intimidating 8 meters (26ft) tall. On top of that, the sequence is also highly technical, with laser precision needed to execute the climb. The South African heat and humidity also have a large impact on such a friction-dependent problem.

As Daniel Woods explained in an email to Rock and Ice, the first half of the problem is similar to tufa climbing, with wide pinches required on arête. For the second half, the problem then moves into compression moves on sloping edges on either side of the arête, requiring full-body power and tension to successfully topout the boulder.

Alex Megos made the first repeat of the line just a few weeks after Nalle’s FA, with the German climber suggesting that it’s “maybe the best line of all time”. The problem put up a bit of a fight for Megos, or at least by his standards, spending a total of 5 days working the Finnish Lin before he eventually claimed the first ascent on the 22nd July 2017. During this trip, Megos had been working the boulder with Jimmy Webb who, despite making good progress with only a few days on the rock, was unable to make an ascent before having to leave South Africa.

Like his fellow climbers, Jimmy proclaimed that the Finnish Line was one of the most spectacular pieces of stone he has ever touched and said the line will be heavily in his thoughts until he returns. True to his word, on the 22nd June 2019, Webb returned and claimed the seventh ascent of the popular boulder problem.

After Megos’ ascent, the Finnish Line received an additional 4 repeats over the next 12 months. Toby Saxton claimed the third ascent in September of the same year and suggested a grade of V16 for the line. Shawn Raboutou and Daniel Woods, both of whom worked the problem together, suggest a more suitable grade of V15. The pair spent a total of 6 days on the problem, three days on a rope, and three days without. Woods explained that he, Raboutou and Megos used a different hand sequence on the top half of the boulder from Nalle, which made their accents easier.