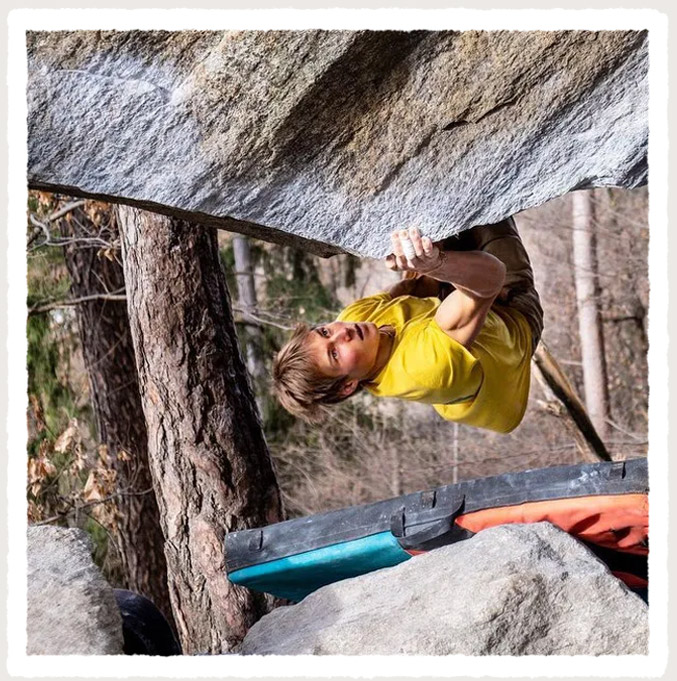 The Story of Two Worlds

An iconic line put up by Dave Graham on the Dreamtime boulder in Cresciano, Swizertland. The name is a reference to the grading inflation of boulder problems that was widespread at the time with Graham labeling the line ‘“new standard for 8C”.

The Story Of Two Worlds Bio

Like a lot of iconic ascents, The Story of Two Worlds (TSOTW) is a boulder problem shrouded in controversy.

The route itself is aV15/8C, 21-move problem on the Dreamtime boulder, found in the popular bouldering area of Cresciano, Switzerland. The Story of Two Worlds sit-start extension, linking up 7 extremely crimpy new V13/14 moves, into Toni Lamprecht’s The Dagger (V14). It was the first confirmed 8C, after Fred Nicole’s Dreamtime problem (on the other side of the same boulder) had been downgraded to V14/8B+ in the years after his first ascent.

The Story of Two Worlds was put up by Dave Graham in January 2005, which he proclaimed as the “new standard for 8C” following the downgrading of Nicoles’ Dreamtime. Graham’s problem has since gone on to become one of the most repeated V15 in the world, having seen over 16 repeats in the last decade.

The first repeat came five years after Graham’s first ascent, with Dai Koyamada bagging the repeat in May 2010. Koyamada’s ascent quickly became a highly debated topic after some of the online climbing community suggested that Dai had inadvertently started the sit start using the wrong holds. Even to this day, Dai’s 2010 ascent is still heavily debated, with some believing it did not count as an official ascent.

On the other hand, footage released of Graham working the problem prior to bagging the FA, indicated that Dai perhaps did use the correct starting holds after all. Graham himself even suggested that Dai’s 2010 attempt was a legitimate ascent of the problem, as did Carlo Taversi, who claimed the fourth repeat of the problem.

Nevertheless, the controversy surrounding this ascent was enough to provoke Dai to revisit the problem, this time opting to make a repeat from an even lower starting position than Graham’s starting position, starting with a match on the undercling and a double toe hook. Dai’s new start is perhaps the most natural starting position for the problem, with the single move addition adding a huge amount of complexity to, what already was, one of the most difficult boulder problems in the world.

Over the next two years, the Japanese boulderer relentlessly worked on the problem, which had become just as much a mental challenge as it was a physical one. Despite returning to the problem several times between 2010 and 2012, on the 22nd March 2012 Dai eventually managed to make an ascent, 5 days into this most recent trip to Switzerland. He suggested that his low start addition brought the grade of the route up to V16.

Since Dai’s first ascent in 2010, countless elite bouldering specialists have tested themselves against this iconic problem.

The line became a major project for Paul Robinson after arriving in Europe in September 2010. It would be six months later in March 2011 when he would eventually claim his repeat. Robinson would have sent it a few days earlier if it wasn’t for an unfortunate dab of a nearby tree on an easy exit move that invalidated the tantalizingly close attempt. He credits his success on the problem to discovering an alternative beta for the final crux, which he states made a huge difference.

In the years following Robinsons’ ascent, repetitions of The Story of Two Worlds boulder problem have started to be logged thick and fast.

Perhaps one of the most impressive repetitions came from Alex Megos. It only took the German a total of four days of working the problem before claiming an ascent. The first two days were spent working the beta and linking the sequence.  Despite the rain on the third day soaking the end section of the problem, Megos made quick work of the bottom section, and came close to a send too, only slipping off three moves from the end. On this fourth and final day, he sent it on his first attempt after a quick warm-up.

Even to this day, the problem remains one of the most iconic lines and the benchmark that 8C boulders are measured against.