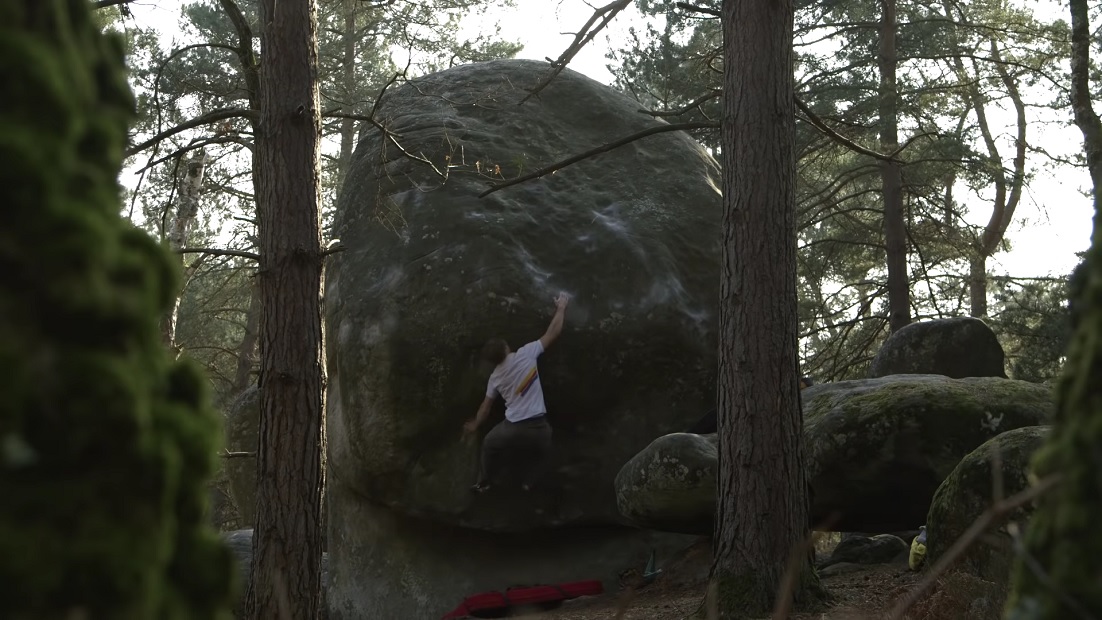 A short boulder in the Fontainebleau sector of Rocher Saint-Germain East developed and first climbed Guillaume Glairon-Mondet in 2014.

La Toupie Carnivore, or Carnivorous Spinning Top in English, can be done as both a sit (8B+) and stand start variation (8B). The sit start begins with an undercling match, up into a left-hand crimp. The next move, the crux of the problem, involves a dynamic right-hand slap onto the sloping headwall, requiring perfect precision for maximum purchase.  From here, the climber must negotiate a series of poor slopers to topout the problem.

La Toupie Carnivore assis became a project for Guillaume in early 2014. While the balance between delicate placements and powerful compressions suited his style, the project presented a challenge for the Frenchman.

Guillaume had the majority of the beta nailed down pretty early on, only taking two or three sessions to work the beta for the sit start and the top section. The crux sequence, however, didn’t come as easily. He spent eight sessions in total working the dyno, attempting the move between 30 – 50 on each session.

Out of the hundreds of attempts at this move, Guillaume eventually stuck the dyno and went on to top out the problem, making the first attempt of the stand start. Knowing the move was now possible, after several more attempts at the sit start, the French native eventually claimed the first ascent of La Toupie Carnivore assis on the second of March 2014 and awarded the route the grade of 8C/V15.

The opening of the problem coincided with the same week of Nalle Hukkataival’s planned trip to Font. When he heard of Font’s latest V15, he was eager to try Glairon-Mondet’s new problem.

On his first session on the boulder, Nalle made quick work of the stand start, opting to use a different beta than Guillaume, choosing to use a mantle instead of the crimps on the other side of the arête. He also attempted the sit start, although wasn’t able to bag the repeat on that session.

A few days later the Fin returned to the problem and after a handful of attempts, managed to claim the first repeat. Although he thought the grade of 8B+ was more suitable, Nalle stated the problem was one of his favorite boulders in Fontainebleau.

The following year La Toupie Carnivore assis received three repeats by Griffin Whiteside, Michael Leweson and Jan Hojer. All three climbers were in agreement that the problem was in the 8B+ range, although Whiteside thought it was between 8B+/8C, stating that he had difficulties with the mantle.