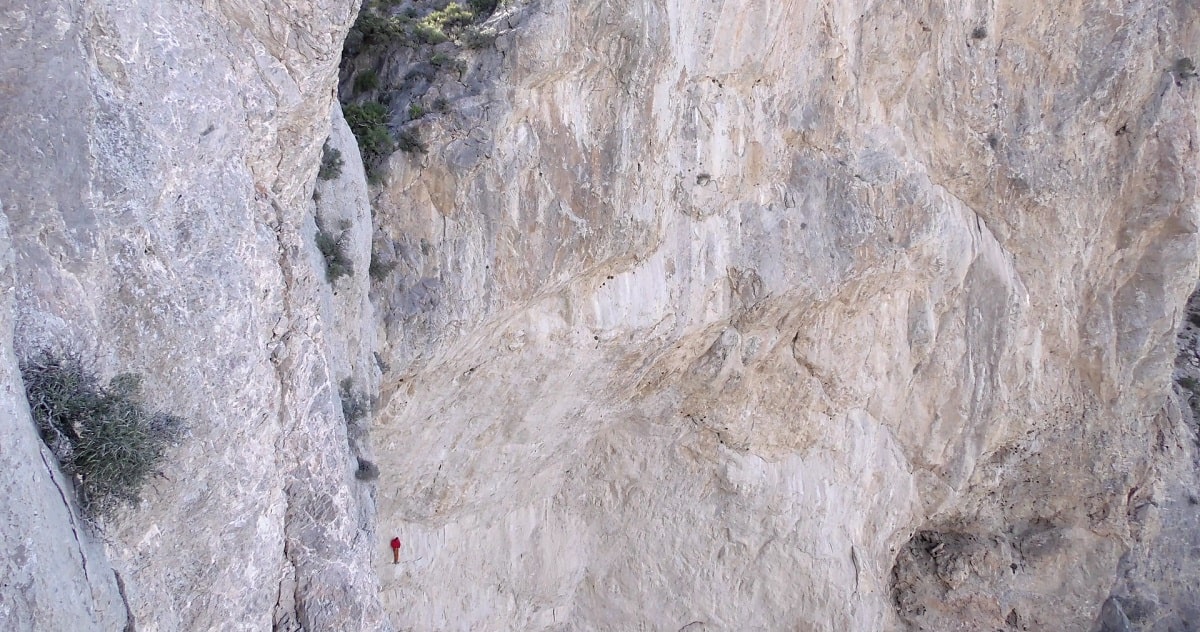 Jumbo Love, an imposing line on limestone cave on Clark Mountain in the Mojave National Preserve, California. The route is currently the hardest sport climb in America, and the first 5.15b (9b) route in North and South America, with Chirs Sharma calling it the “biggest, most badass line you can imagine”.

Jumbo Love was first bolted by Randy Leavitt, a local California climber who had established several lines on the Clark mountain. Although it was originally bolted as a 3 pitch climb, Sharma envisioned a mammoth 250ft (76m) single-pitch sport route and re-bolted the face to facilitate his vision.

The line consists of long, varied, endurance-testing climbing. It starts with 60 ft section of 7c/7c+ to reach the start of the route, where the line begins with 100ft of 45° overhung 8c+ climbing, including a crux sequence requiring a contortion move with an inverted foothold and a sloping pinch, then tops out with a top section of 8a+/8b.

The quest for the first ascent began in 2007 with Chris Sharma and Ethan Pringle to work on the route together, captured by Reel Rock in season 2. Because the route is exceptionally difficult, both Ethan and Chirs would miss out up to three bolts in a row, leading to 100ft falls. The two men spent several months working on the line and despite making good progress, were forced to leave the mountain for the season due to the hard winter conditions.

Both climbers were determined to bag the first ascent of, what would become, one of the few 9b ascents ever made. The route would match Bernabè Fernandez (Chilam Balam) and Dani Andrada, (Ali hulk sit start extension) to become one of the hardest routes in the world. Both climbers admit there was some friendly competition to be the first ones to clip the chains, and set about training through the winter months to allow them the best possible chance of the first ascent.

In 2008, Sharma spent the first half of the training hard and building his endurance to come back to Clark Mountain. Sharma’s chances of bagging the route’s first ascent that season were looking promising. He was in exceptionally good shape, having already made repeats of world-class sport routes like Gancho Perfecto and Papichulo in early 2008.

Ethan was also embarking on a training regime of his own to prepare him for the hardest ascent of his life. However, and after a landing went wrong on a bouldering in Bishop, Ethan fractured his heel, and was forced to spend several months on crutches. Whilst on the road to recovery, Ethan again experienced another injury, this time experiencing a torn labrum in his left shoulder.

With Pringle out for the season, Sharma made his way back to Clark Mountain alone and sent the route on the 11th of September 2008. After the first ascent, Sharma named the route Jumbo Love, a nod to Leavitt’s neighboring route, Jumbo Pumping Hate (8b+).

To date, Jumbo love has only received a handful of real attempts, perhaps down to a combination of the difficulty of this endurance-testing line and its inaccessible nature. After all, this is no roadside crag. To reach Clark Mountain you first have to drive 40 miles south of Las Vegas, along 10 miles on a rough dirt road, only accessible by 4WD, then you hike up 600m in elevation to the base of the mountain. The you need to climb that initial 7c+ up to the start of Jumbo Love.

After missing out on the opportunity for the first ascent, Pringle’s motivation to return to Clark Mountain faded. It would be over 7 years before he would return, and after almost a full season working the route, and months of re-learning the sequence, he finally bagged the first repeat on 17th May 2015.

The next ascent would come in 2018, this time at the hands of Jonathan Siegrist. Siegrist first started working the route in 2016 and spent about 10 days on the route that season. Despite not being able to claim the third ascent on that occasion, he would return in May 2018, and after another 10 days on the wall clipped the chains on the 17th May 2018.